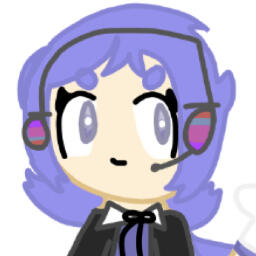 [UPDATE: I can now confirm officially that Natsu's* VB does work with UTAU (Windows), as I just tried it myself. Although, there are some errors you may encounter which include: Errors relating to "Parameters are incorrect" when copying +HARSH+ to the voice folder in UTAU, specifically with files that have ":" or "/" in them (like the numbers, and qwuh/kwuh), and a pop-up from UTAU stating "Invalid Image" or "Invalid Icon", which might be due to the fact that her icon is a .bmp file. If there are any problems, feel free to contact me at my Tumblr. (Credit to trelliah on DeviantArt for the Cross-Platforming tutorial)
*Her +HARSH+ VB, at least.
Happy UTAU'ing :)]
[UPDATE: The decision to release Natsu's voice provider has been made. She is confirmed as Hype-tieR-.](DL = Download)
(IDL = Instant download; will download the moment you click the button/link) 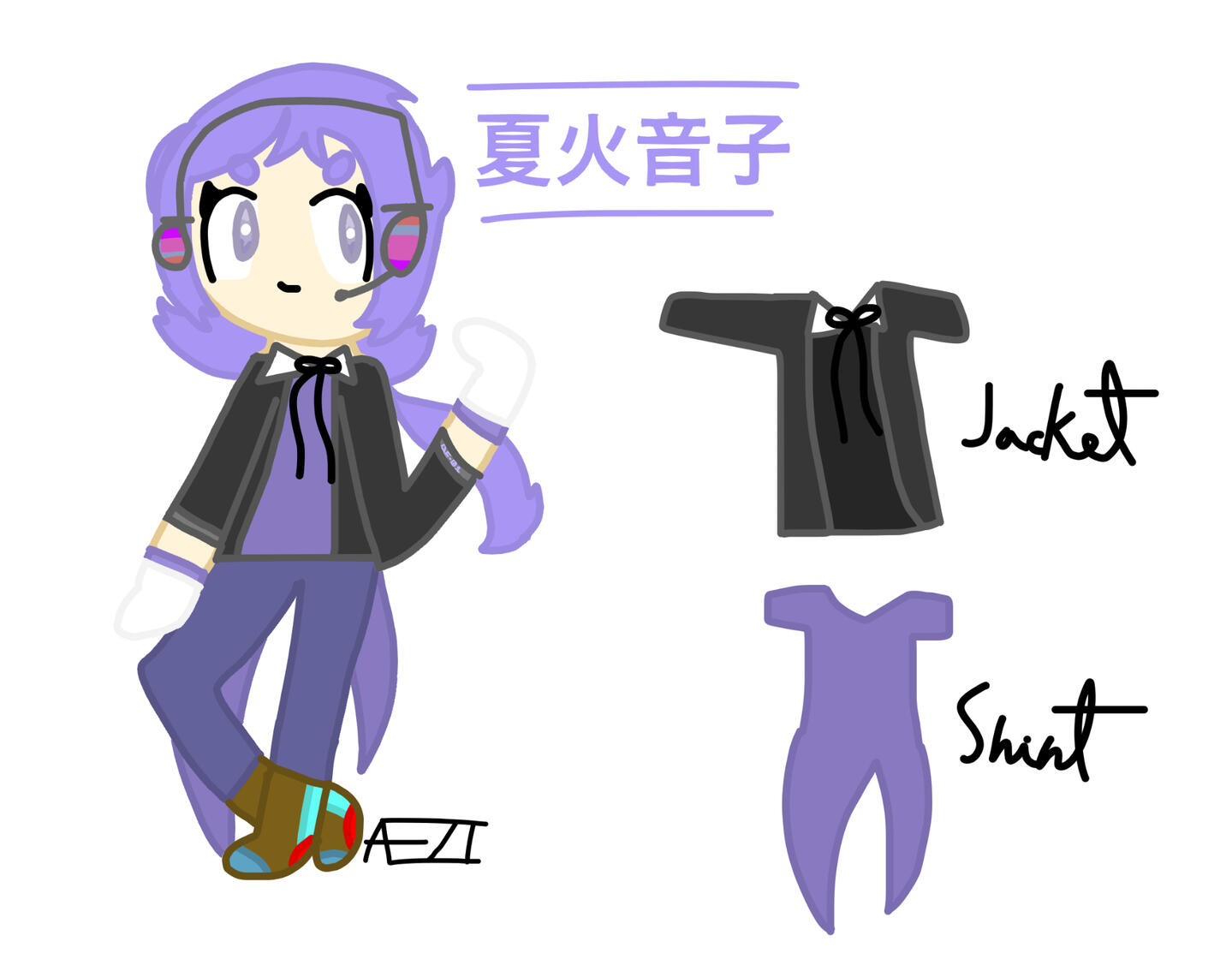 Hiotoko's +HARSH+ design (above, first). She wears a desaturated purple short sleeved shirt with a v-neck collar that has a small bow. The ends of her sleeves are yellow colored with white buttons on the sides. The shirt has a - uh - what do I call it - musical logo, for lack of better knowledge in the middle that looks like a smug face. She has a darker colored skirt with pockets on the front sides. The skirt is held up by a desaturated light blue belt with the code AE-01 in the middle (being that she is AEZI's first UTAULOID). She also wears white elbow length gloves with the rim the same color as her shirt. Her shoes are brown knee high fur lined boots with cyan stripes down the sides and darker cyan colored heels, with a red bow tied to a equally colored - puffball - once again for lack of better words. Her headset is a desatruated red, pink, and blue, with the red being the inner left and right, and the outer top and bottom, the pink being the inner top and bottom, and the blue being the outer left and right. The red and pink sections glow, but the blue sections don't. The end of the headset microphone is a lavender color.
Her hair is a slightly desaturated purple, and is short. She has a ponytail held with a desaturated blue scrunchie. Her eyes are a heavily desaturated purple, with a white pupil in the center.
------------------------------
Hiotoko's +SWEET+ design (above, last). She wears a dark grey long-sleeved jacket that has her +HARSH+ design collar, along with the small black bow. On the cuff of her left jacket sleeve is the code AE-01 just like her +HARSH+ design. Her normally shoulder-length gloves are replaced with just-above-the-wrist-length ones, with the same style and cuff. Underneath her jacket is an almost conductor-style slightly-below-the-thigh shirt, the same color as her +HARSH+'s design, with a split back ending in two long, almost lobster-claw like ends. Her knee-length boots are replaced with above-the-ankle boots, getting rid of the puffed rim and the red bow, keeping the cyan lines and making the heel the color of the bow and the toe a dark-ish cyan color. Her headset somewhat matches that of her +HARSH+'s shirt design, with the note structure and "eyebrows", so to speak. Her headphones use the color of her +HARSH+ design, removing the sections and instead making it a striped order in desaturated red, blue, pink, and purple for the left ear, respectively, and the opposite arrangement for the right ear, with the grey mic on her left.

[Note: The folloing info has nothing to do with the voicebank, only it's design]Name: Natsu Hiotoko
Gender: Female
Age: 13
Birthday: February 13
----------
The rest of her personality is now set to be up for speculations and headcanons.

NATSU HIOTOKO +HARSH+English: Hiotoko Natsu
Romaji: Natsu Hiotoko
Kanji/Kana(?): 夏火音子
Hiragana: なつひおとこ
Katakana: ナツヒオトコ
Meaning: 夏 (Natsu) - Summer; 火(Hi) - Fire; 音 (Oto) - Sound; 子 (Ko) - Child; basically Summer Fire Sound Child.Voicebank Description:Hiotoko's voice is very powerful when used in the right ranges, and has a similar ring to v4flower's. She hits notes in the E3/G3 to F#4 range rather easily, although going lower than G3 can make her sound a bit off. Going too high (usually above G#5?) can make her voice sound off and quiet it down as well. Her voice can be described as powerful and harsh, and a bit raspy. There are some words that have a different pitch from the rest due to recording issues. There are extra sounds and aliases due to the voicebank originally being a bilingual Japanese/English voicebank, including sounds like L, Q, Xi, and V, but they didn't get OTO'd, and as a result, I decided on just a simple Japanese bank. Besides, I'm sure you'll find a way to make her speak English without all the other sounds.
I like to say I OTO'd Natsu's voicebank fairly well, although during some (and by some, I mean most) notes, there's this... thing. I have no way to describe it other than a blip, and it happens during long notes, sometimes short ones too. The "te" syllable doesn't do it though, soundly beautifully. And yes, I'm sure there are some syllables her voice provider pronounced wrong as well.As for specifications, I'd say Natsu's voice is best around F#4 and E3 personally, as she sounds more natural to me. I'm unsure what genre her voice would be best in, but I'd say something like rock. Or something strong like Close To You, Aishite Aishite Aishite, or Rolling Girl. Her bank was originally going to be Romaji/English input/aliases only, but I remembered that a lot of USTs use voicebanks that take Hiragana. I may also add Katakana aliasing/input as well.EDIT F1422: Some of the extra sounds are now OTO'd. Not all of them though. That'll be another day. -AEZIEDIT F1522: Katakana aliases/input have been added :) -AEZI
-----------------------------
NATSU HIOTOKO +SWEET+English: Hiotoko Natsu
Romaji: Natsu Hiotoko
Kanji/Kana(?): 夏火音子
Hiragana: なつひおとこ
Katakana: ナツヒオトコVoicebank Description:A lighter, softer, and sweeter tone of voice, Hiotoko's +SWEET+ VB is for when power just wont fit your song or preferences. When you download the .zip file, please make sure to read the "!!! FYI !!!" file in the folder, as it contains an important note about Natsu's +SWEET+ voicebank. :)
Although I can't exactly tell you what samplers/plugins to use for either voicebank, I can sort of tell you what flags to use, (for +HARSH+, anyway) said flags being similar to Y47H35F2h3C23D35E12. Now be aware I found these flags while playing around one day, and they may not necessarily produce accurate or desired results when used, especially with +SWEET+. Just be aware.-AEZI

GALLERY (I ran out of elements.)